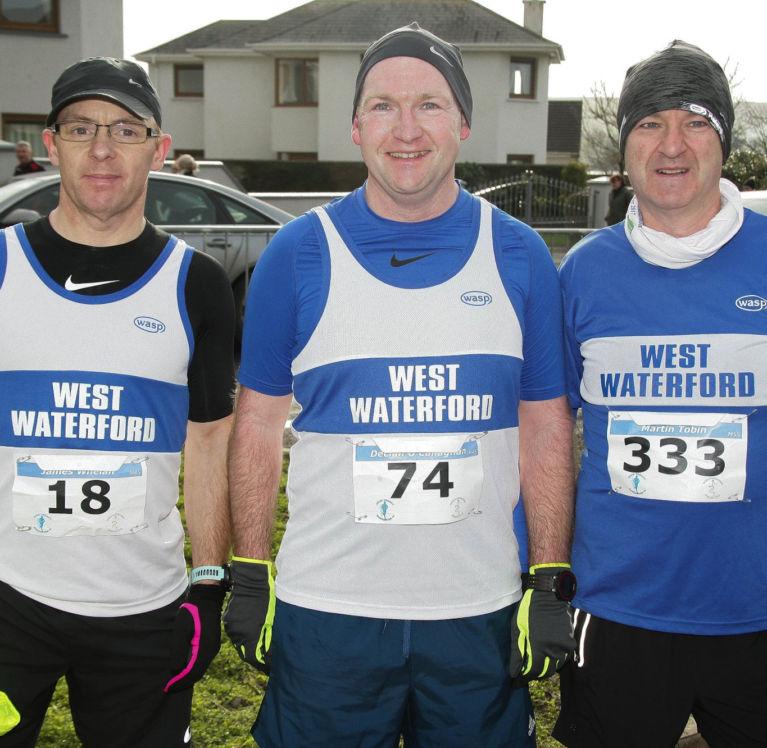 The race day packs and numbers are now all posted out to all entered in the race so you should have receive your number along with all the information you need to know regarding the 31ST annual John Treacy Dungarvan 10 mile road race over the past few days. This means of course all you have to do on race day is to be at the start line well in advance of the new starting time of 11 AM with your number pinned to the FRONT of your club running singlet. When you have finished the race and cross the finish you will receive you’re goodie bag with lots of treats for you to enjoy after the race and you will also receive a high quality dri-fit Nike running top. This is one race where the club really relies on the goodwill and the support of our loyal club members and friends. This race is the biggest undertaking by the club each year and as a result we rely heavily on your support, so if you might be in a position to help out in any way that would be welcome. We need people to steward the course and you can never have enough.  The club needs as many members and friends to help us make this a great race and a great day for West Waterford AC and for our town.

First held 12 years ago as part of the John Treacy Dungarvan 10, we introduced the John Treacy Team Challenge with clubs from all over the country battling it out in both the men’s and women’s team competition. West Waterford AC were the inaugural winners here in the men’s event while Eagle AC from Cork won the Ladies team race.Teams will consist of 3 club runners regardless of category whose combined finish times will be added together. Individual/Category prize winners can also count for the John Treacy Team Challenge. This Challenge Cup competition is separate to the race team prizes. Prizes will be awarded to the winning teams and of course they will have the honour of having their club name inscribed on the magnificent John Treacy silver challenge cups.

The course this year will remain the same as last year’s course, starting on the Youghal Road as usual but it will now start near to the Amber Garage, the race will do a short loop around Mitchell St. down Collins Road, back out the Youghal road taking a right turn down to GlaxoSmithKline, taking another right turn here down through the finish line and onto the N25 going left  to the Spring roundabout, taking a left turn past the former Crystal factory out to Bushy Park, and left down to the canal Road coming out at Ring cross, back in the Youghal road all the way to Stafford turning left up side of Stafford taking a right at top to GSK roundabout turning right to finish line at Cappoquin Transport depo.So plenty of opportunity for spectators to view the race on a few occasions. We do ask that spectators park well away from the course as they will not have access around the course itself as there will be restrictions in place during the race. Everyone’s cooperation is needed here for the smooth running of the event and we thank you in anticipation of this. Please note also that all prizes for this year’s John Treacy Dungarvan 10 will be posted out to our winners the days following the race. Only the overall top individual race winners will be presented with their prize at the finish line.

PREVIOUS WINNERS FOR THE RECORD

Previous overall winners of this race are as follows:

A huge thank you to all who have supported this year’s John Treacy Dungarvan 10 chosen charity Bumbleance, many have donated monies when entering the race which we sincerely thank you all, a cheque will be presented to the charity representative’s on race day.

Please note that category prizes for this year’s John Treacy Dungarvan 10 will be posted out to our winners the days following the race. Only the overall individual race winners will be presented with their prizes at the finish line.

Yet another good night for running, how lucky we have been this year for our winter league with only one wet night two weeks ago, hopefully now for this coming Wednesday’s mass start night as is tradition on the final night evening our final round of the league it will be as good as last week.This was our fourth night back since Christmas and we are now down to our final round before the conclusion of this year’s league.There was a great number out again last Wednesday when 77 runners took up the challenge.First home on the night was Maeve Bradfield in a time of 26:30 with Jennie Moore next in 23:53 and third past the post was Paul Mc Grath 18:09.Well done to all who took part. Next Wednesday night is our final round and a mass start be down early please as short course goes at 6.45 sharp .Also remember that there is a winter league running hat for anyone completing 8 of the 11 nights of the league, this hat will be distributed to those eligible to get on at the finish line.

The overall league table was shook up this week as Phil Coffey who was a front runner previously in the short league slipping into the top spot on 936 points.Behind Phil in 2nd place now is Kelly Shalloe with 891 points, Kelly has won this league previously when in 2018 she was our overall short course champion, 3rd currently is previous league winner on the long course David McGrath with 891 points same total as Kelly,David won the long course league in 2015, so can he become the first runner to claim titles over both winter league distances.4th with one round remaining is Owen Power with a tally of  878 points, so it’s all to play for yet and the same can be said about the other divisions many too close to call.In division 2 we have Gráinne Moore is leading with 780 points and cold be uncatchable here.Division 3 see’s Evelyn Beresford on 678 with on Elaine Curran 675 these two are having a ding dong battle only 3 point’s separating them. Tammy Hurney with 616 points id holding well despite the efforts of Darcey Toft with her 603 point tally.Next we have division 5 where Judit Mc Nally on 541 is holding firm despite the efforts of Mary Power with 524 points.Division 6 see’s Jennie Moore with 577 points from Michelle Mc Carthy on 555, this one is still to play for and hard to call. Anthony Fennell on 434 in division 7 will most likely hold off Rosie Moran who is on 402 points and Division 8 we have Stradbally’s Eoin Cunningham with 437 points looking home and hosed as in 2nd place Aoife Fennell currently on 339 has a lot of catching up to do.In our final division Ruth Fennell running her very first winter league is looking good with 360 followed by Tomas Murphy with a total of 219,so all to play for yet, best of luck to all on the final night and a mass start.

With just one round remaining in the current Fordes Daybreak winter league we were blessed once again last week with a beautiful night as the 164 runners made their way round the course. It’s very noticeable the improving times being recorded over the past number of rounds, it’s all down to this week’s mass start now so best of luck to all.Having a brilliant run last week and first home was Kevin Casey in a time of 36:05 with Onra Power next in 46:29 and third home last week was Pat  Morrissey 45:20.So a reminder to all that this week’s final night of the league and it’s a mass start as is tradition at our winter league, please be on time as the long course goes off at 6.50 sharp.

LONG COURSE LEADERS BATTLING IT OUT.

The points system in use for this year’s league it has to be said is working out great. As you can see there is very little between athletes in most of the divisions and indeed in the overall as well. It’s really hard to predict at this stage who will even be crowned the champ, even with only one round to go. Next Wednesday night we will have a new name inscribed on the Fordes Daybreak winter league cup for the long course and who’s it to be, well at the moment after week 10.Linda Foley is now holding a slender lead at the top of division one with 1522 points from Tara Ní Reachtagain  who is second with 1506 points and flying the flag for the Men is Tom Hogan with 148.All we can say here is may the best runner win, but it going to be close. In division 2 it’s as close as you can get one point separating Niamh O’Donovan 1347 and Phil Dee 1346.Division 3 sees another point separating Yev Chizhikov 1235 and winter league first timer Ciara Barry 1234. Division 4 looks to be going Pat Morrissey’s way who’s on 1226 with Anne Moore on 1175 points. Division 5 Jim Barry 1156 and Jack Nolan with 1140,this one will be close on the final night. Division 6 sees the battle of the courty boy’s with Peter Phelan 1002 and his former team mate Gary Hurney with 965 battling it out. Division 7 has Nicola Costin 979 heading up affairs here from John Coffey on 948 still in with a shout. Division 8 has John Paul Hogan with 918 holding a slender lead over Lismore’s Geraldine Barry who has 909 points. In Division 9 Claire Power has battled hard throughput the league and is on top here with 898 closely followed by Daniel O’ Sullivan on 875 points. Division 10 it’s Helen Keating           on 845 with a cushion of 45 points over Richie Walsh with 800.The final Division 11 sees Shane Healy with 808 and our event sponsor Kevin Forde in 2nd place with 772 points.So it’s all down to the final mass start night this Wednesday.There’s a nice group stacked up in the top 10 placing’s all still in with a shout of becoming the new winter league champion in this year . The division battles are also so very very tight with some leaders and second place athletes on the same points and more with just one single point separating 1st and 2nd.Best of luck to all for Wednesday mass start.

As is tradition at on the final night each year of the Fordes Daybreak winter league will be a mass start for both the short and long course events. The short course will start at 6.45 pm and the long course will get under way at 6.50 pm.Best of luck to all for the final night as we wait with bated breath to see who will lift the two cups this year.

This is a night not to be missed when this Sunday February 5th we are holding our Fordes Daybreak winter league prize presentation night and also the John Treacy Dungarvan 10 celebration evening at the Park Hotel with proceedings getting under way at 8 pm. Food and a great nights music is in store for all and a big turnout is expected for what will be a night to remember. No fee involved so please come along you won’t be disappointed.